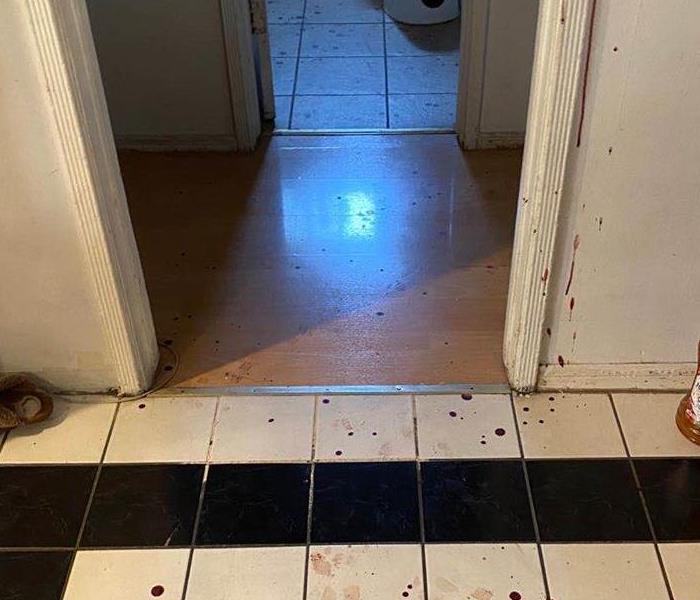 A family with a newborn baby had a major scare the end of 2020. One afternoon the wife and daughter of the man that called SERVPRO San Gabriel had been home alone when an intruder broke into their home carrying a machete saw that he had on and running. This intruder came in through the back door of the house, and ran throughout the entire property. He got his blood everywhere. From the ground, the walls, the bathroom, the baby's room, crib and bedding. I would be disgusted and terrified being a new parent and having this blood all over my child's belongings. With that being said, these homeowners and new parents contacted SERVPRO of San Gabriel. We arrived as police were finishing their report and removing the intruder from the premises. When SERVPRO of San Gabriel arrived they began to remove and dump all affected contents in proper biohazard waste containers. After removing affected contents technicians began tearing out and removing affected areas and followed up with a decontamination job. The homeowner was extremely pleased with our work and has actually referred us. "Thank you SERVPRO San Gabriel, I'm very pleased with the work .. THANK YOU!"

SERVPRO of San Gabriel specializes in biohazard, water, fire mitigation and restoration. Biohazard contaminants should be considered very dangerous as they can pose a serious health risk. Sewer backups and flood water are two common biohazard scenarios that can affect homes and businesses. SERVPRO Franchise Professionals have the training, protective gear, and specialized equipment necessary to safely clean and restore this type of contamination.

In case of a biohazard incident, please do not leave any items or personal possession in the contaminated water. SERVPRO of San Gabriel do not want to have any cases of cross contamination, since all biohazard cleanups are considered cat.3. Exposures to biological and chemical contaminants can pose serious health consequences. It will be safe if homeowners evacuate from the contaminated area.